Kopper Kadhai is one of the best fine-dine restaurants in Koramangala. I have been here on multiple occasions and I have always been a fan of ambience, presentations and food here. A conception of celebrity Chef Akshay Nayyar, Kopper Kadai had probably one of the fanciest food presentations in Bangalore. Kopper Kadai has a wonderful ambience. With a balance of simplicity and flashy, it is one of my favourites dine out places.

As such I have visited this outlet multiple times, and this time I was here on an invitation for the exclusive tasting of menu-2.0 along with a bunch of my fellow bloggers. 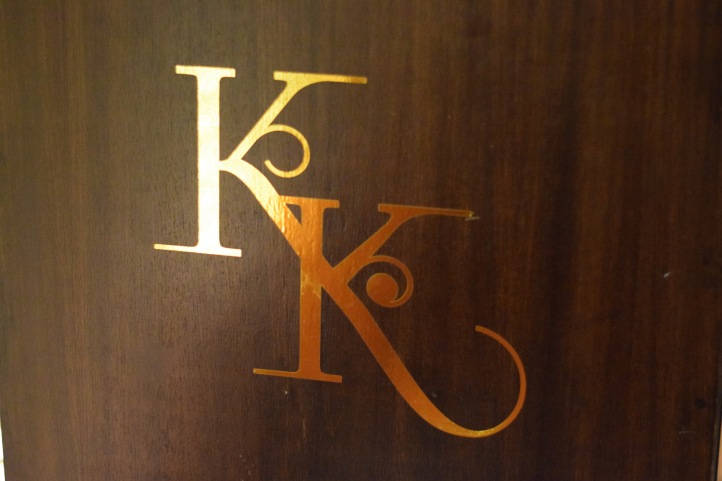 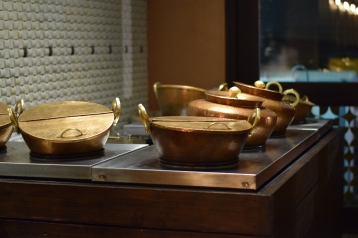 We taste three newly added drinks to the menu. The first one being Kashmiri Kiss was an absolute delight. The drink was made with all Kashmiri ingredients like Saffron, Apples, and Cinnamon. The cinnamon stick is lit up at the time of serving to provide the aroma of cinnamon giving a wholesome experience. I highly recommend this one.
Another lovely addition was Chillar Chai, which is basically orange infused iced tea with mint adding to the refreshingness of the drink.
Other newly launched drink is Jugalbandi. A sharp tasting drink made with Chilli Guava and Soda. Very refreshing! 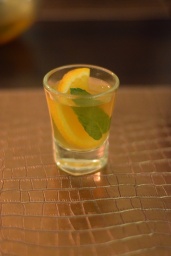 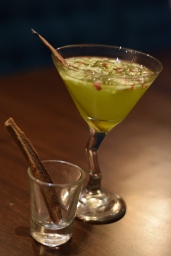 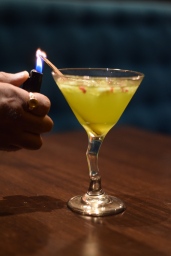 kashmiri kiss
Amongst vegetarian starters, my favourites were Kastoori Malai Broccoli and Nadru ki Chaat. Kastoori Mughlai broccoli is the best broccoli preparation I have come across. Beautifully marinated with cream and subtle hints of mustard, this Broccoli Kebab is the clear winner. Nadru ki chat is a crispy lemony chaat of lotus stem, very delicious. Jwalamukhi is a hara-bhara kebab with cheese filled inside. The explosion of cheese when the kebab is cut inspired the name. Ande ka funda is the deviled egg, with spinach and cheese stuffed in. The two options are quite good and worth giving a shot. Limca bhel was another tangy street food brought on the plates of a fine dine restaurant. Pesto Soya Champey and taka tak paneer tikka are few more tasty additions to the menu.

Non-vegetarian starters have always been popular at Kopper Kadhai. While legacies like Ganna Chicken continues to rule the menu, there are few scrumptious options which are adding glitter to the plate here. Murg Korma Kebab is best performing newcomer so far, and I would highly recommend it. Beyti Seekh (basically chicken sheekh kebab wrapped in a roti), Haryali Macchi Tikka(Fish marinated in coriander pesto) and Matke ki Champey (chilly and mustard cooked chops) are few good additions as well. 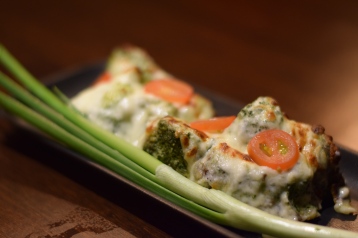 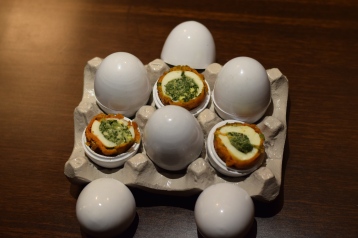 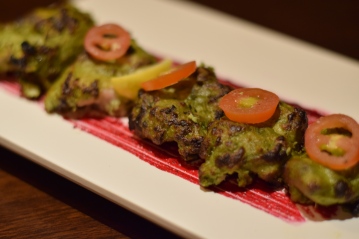 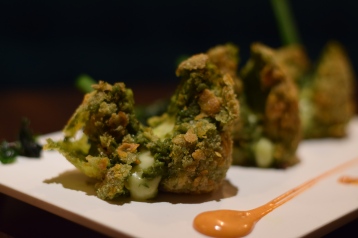 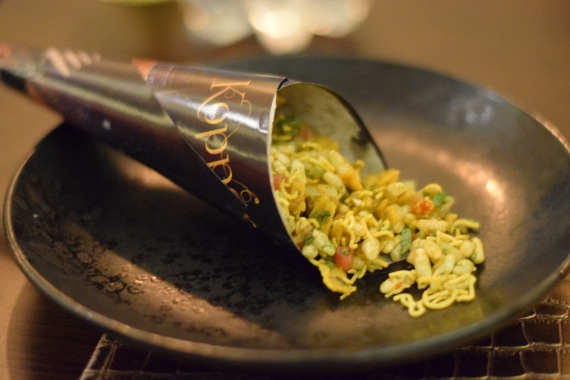 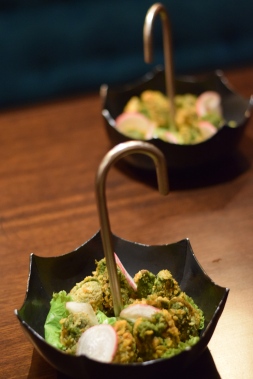 While there are a lot of lovely vegetarian additions to the menu, I would start with the non-vegetarian delicacies. Gobhi chicken, one of chef Akshay’s favourite creations is cabbage and chicken cooked together. The sulphur in cabbage accentuates the flavour of the chicken. Laal maas, a mutton creation was my favourite one the new menu and the most unforgettable flavour of the dinner. Chowdhary chooza, as the name suggest a spicy chicken dish, was cooked to perfection and had the right blend of spices. Served in a well with smoked spices on top, this is also one good addition to the menu. I would all three of these highly.

As I mentioned there were a lot of vegetarian options added to the menu, even though a non-vegetarian in me is more attracted to the meat, I won’t fail you, my vegetarian friends. The star vegetarian newcomer is Badshahi Paneer Rubiyan. I am not saying all you need is a Paneer Koftas in a rich gravy, but it surely has to be invited to the party. Warqi Dal-e-dastan tells the story of a delicious dal makhani that just cannot be missed out. And then there is Palak Malai bhurji, which you’d like if you like spinach-based dishes. 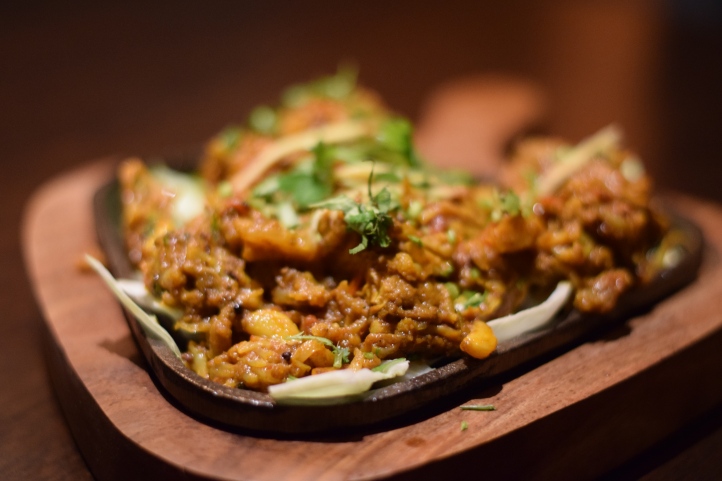 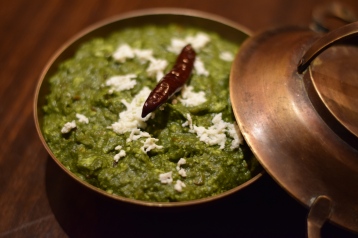 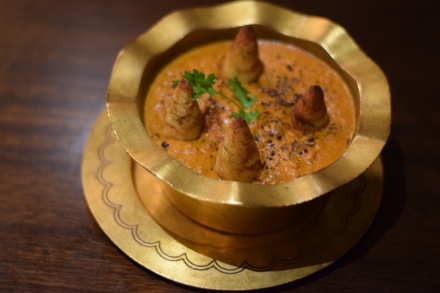 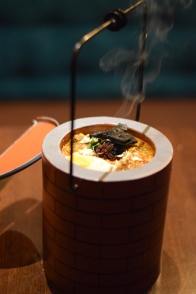 Now my favourite part of the review, Desserts. These new additions to the menu impressed me to my core and filled me with nostalgia. Even though I claim not to be a Delhiite, I have spent a huge part of my childhood in Delhi, hence the aroma of Gajrela and Dhodha touches a nerve with me. You MUST try Dhodha Nutella blast especially if you have never had dhodha. An Om sweet special Dhodha is something you shouldn’t miss in Delhi, and Chef has made it a point to bring that taste to Bangalore. Thanks for that. As for Gajrela, you cannot forget the aroma of Gajrela in Nothern India’s winters, where your mum/grandmom make this amazing mouth melting carrot pudding. This Gajrela is one of Chef’s Grandmother’s recipe and is so delectable.

One thought on “New flavours in this Kopper Kadai”